I’ve read so many first person romances lately, I thought, I should try that. I’m not entirely comfortable with it. But I like that because uncomfortable forces you to stretch and it’s trying something new, which I’m always up for.

The hero, Natty, was first introduced in Fiona Love, and in this tale he has his choice between two women who couldn’t be more opposite. Reiko is a tough cookie. She would describe herself as a ghetto girl given her love of drinking, smoking and guns, but she’s way more than that. Cora Lee (Cece) is a transplanted country mouse, a technical virgin – more on that later – who’s had a hard life, but by luck and pluck has managed to turn things around. She is in love with Natty, and I THINK they’re going to end up together, but it’s still to earlier to tell. I’m thinking major love triangles, but we’ll see. Here’s a little scene I wrote earlier today. 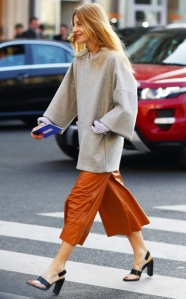 The picture is an outfit I liked on stylist Ada Kokosar. It’s simple, but weird. Kind of architectural in a way, the lines of the pants and the cut of the sleeves on the shirt. And I think anything lucite-ish a la those heels is always worth a second look.:

I’d caught him giving me odd looks once or twice. Of course, I was so frickin’ paranoid these days I wasn’t sure exactly what I was seeing. Sometimes it seemed he was confused, like he was trying to figure something out. Those looks made my heart race and sweat pop out all over me. Logically, I knew it was irrational to think that he could see my wounds, that my degradation was visible like some modern day scarlet letter. But the mind and heart are not always logical. When his golden brown eyes lingered too long on my face or my clothes, I wanted to hide. To cry out that it wasn’t my fault, that I hadn’t enjoyed it, that I’d run, I’d gotten away. I couldn’t help it that my past had followed me here to my new life like some horrid, cheap cologne. But I also had to get over myself. It wasn’t like I could do my work while hiding in the bathroom.