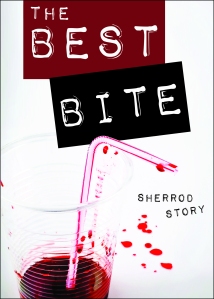 I wrote this young adult paranormal romance a few years back, but the characters have started acting up again. Are you guys ready for a sequel?

Enjoy this snippet. The Best Bite is out now.

When his magic first came in six months ago, Bastien hadn’t believed it either. When he’d casually snapped his fingers and a flame appeared, he’d instantly dropped his hand and played it off as though nothing had happened. It was a miracle no one had seen him. He’d sat in shock nearly an entire class before he could escape to the restroom and gather his wits in the privacy of a stall.

Then he snapped and snapped and snapped until his fingers cramped up. But no flame appeared. He convinced himself it was a hallucination, the result of too much sugar and not enough sleep, or whatever nonsense he concocted to explain the incident away. Then other things began to happen.

While sitting in class his stomach growled, and he thought about the madeleine cakes and hot chocolate he’d had for breakfast while visiting his aunt in Paris last summer. A second later both appeared on his desk. It wouldn’t have been so bad had the homemade offering not materialized on his aunt’s china, the hot chocolate steaming in a porcelain cup complete with saucer.

The only thing that saved him was a childhood fairytale that popped into his head like a specter. For reasons unknown his father had insisted he learn it as a boy, drumming the rhyme into his head long before he ever dreamed he might be a witch. A classmate had perked up, curious about the pastries, now sans dishes, but he managed to allay his suspicions by offering one of the little treats. The boy had been too busy chewing enthusiastically to query why they were suddenly there on top of Bastien’s text book. He quickly gave all of the pastries away, his appetite vanishing in the turmoil rioting in his belly.

One incident was an aberration, something easily explained away. Flowered china was harder to ignore, especially since he’d said a few words and made said china disappear as quickly as it appeared. He’d thought those silly spells were just stories his father had made up to tease him as a child. But they were real. His brain had reached back effortlessly, his mouth recited a memory, and poof, random hallucinations undone.

After that it was as if the flood gates had opened. Every related memory surged forward in his mind. Scenes he hadn’t recalled or even remembered in a dozen years played themselves before his minds’ eye like a film. Only this was a show filled with lessons he was able to access as easily as one changed a channel with a remote.

You must be grateful, my boy, otherwise magic will play tricks on you, he recalled his father saying. The powers that be see everything done, everything you need, everything you think you may want. And if you don’t appreciate your gifts, they have a way of turning them against you.

Vanishing flowered porcelain during Spanish was a pretty mean gift if you were a 17-year-old boy.