I’m a bum. I still haven’t been able to release this book yet. I’m either crazy, or something worse because I can’t seem to take my fingers off this sucker. Could it be fear? But I don’t feel scared. Uggg! I do feel bad though, ‘cuz I keep lying saying it’s coming out, it’s coming out. I’m sorry, y’all… *Looks shamefaced*

I think maybe these characters, Sinna, Tan, Saint, Bik, Hyuk, Hua, Cong, and the rest, have become like family to me. I don’t want their story end. It can’t. They’re not done, you know? So, we need a sequel. LOL Meantime, we’re blogging!

In this snippet, which picks up where last week’s leaves off, now that our hero and heroine have been intimate, Sinna wonders if people can actually tell? Can someone actually emit a recently fucked vibe?

Let me know what you think.

Oh, the picture is of South Korean actor Sung Hoon, who I’ve featured before. But his cheekbones, tallness and deep voice deserve another opportunity to be admired. I’m trying to watch “I Picked Up a Celebrity on the Street.” The reviews say hang in there, it’s different and great, but I don’t do well with silly in the beginning…sigh. Still, I gotta try for that jawline. Is that petty? Vain? Oh, who cares. We’re just lookin’, right?

Of course, everyone knew.

“Did you really tell everyone?” she asked when they were back in Korea.

Hmmm. Was she emoting some kind of I was recently fucked vibe?

“My behavior may have given us away,” he admitted, peeping at her from under his lashes.

“Bik says I follow you with my eyes constantly, and I’m always smiling like I have a secret.” 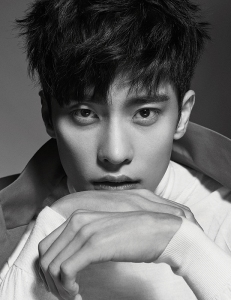 Sinna stared at him, then looked over and met Bik’s laughing eyes. “Hmmm.” That was probably true. “Oh, well, no matter. But I won’t tolerate any teasing. I’m too old to be bothered with that shit,” she muttered.

“Of course not, Sinna-ssi. I would never allow them to tease you about this.”

She eyed him, hmmmphhed and after sweeping her grinning team with a “don’t mess with me” look, went back to work.

She was surprised and touched when everyone kept their distance. It was enough dealing with Tan’s hot-eyed ass and keeping up with the avalanche of work she had to get through. She needed all her powers of concentration not to give in to an endless desire to seek him out, and when he was near she had to exert the will of the Gods to behave professionally.

She supposed it was her newly reawakened sensuality that was urging her to unleash her dusty but once effective wiles to tease him. She wanted to be chased, caught, overpowered, fucked. This must be what they mean when they talk about “hot” women in their late thirties and forties experiencing a kind of puberty, she thought.

When he was sitting she wanted to plop herself on his lap and wrap her arms around his neck. When he was eating, she wanted to hold the glass to his lips, and gently wipe his mouth with cloth napkins. Hell, anytime he was anywhere she wanted to strip him naked and ride him until their skins slapped, sweat popped, and she could hear that beautiful noise he made when he came. But there was a ton of work and many eyes watching her every move.

It was like Terrence Howard’s character said in Hustle and Flow, ‘we ain’t gon’ get no move on sitting on our ass all day.’ But damn! She had some more moves she wanted to show her Korean cutie.

I need my ass kicked, she thought.