Hey y’all. I’ve been MIA for a few, I’m sorry! I’ve been thinking about you, though, swear to God. Work has been all up in my grill! But I’m getting close to the end of my green demon tale. I just had this boss idea about, well. I’ll let you read it when it comes out :). Meantime, please enjoy this unedited snippet. It’s a flashback to when Lucky was a baby on his home planet. His mama’s having a tough time dealing with his power over the animals, and she decides to go to their temple to pray for guidance. Lemme know what you think! – SS 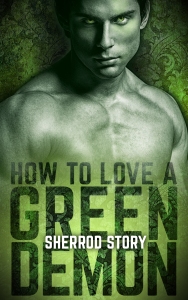 The journey was easier than Sucire anticipated. The animals walked them nearly the whole way, various ones setting Lucky on their backs and carrying him when Sucire got tired, or when he grew tired of running alongside her on his tiny legs.

The animals brought them water and food and showed them a short cut that shaved nearly a half day from the trip. They moved easily along a path Sucire never would have found on her own, half hidden as it was by leaves and vines. But the forest floor beneath her feet was well worn, so worn she knew the path she trod was older than she was.

“I have been made privy to all manner of wonders because of you, my son,” she told Lucky, who grinned, not knowing quite what she meant, but discerning rightly that it was good.

She and Lucky stared in awe at the temple when they arrived. The zin was just beginning to set, it’s pink and yellow light refracting against the smooth stone walls of Tunoi’s stately spiritual home until it appeared gold.

Lucky nodded, craning his small head back to examine the stone statue of Tunoi with her spear and yanth flanking her at the temple entrance. “Mim!”

Sucire laughed. “I suppose she does look a little like me, at that, my son. Or, I look like her.”

She placed the flowers she and Lucky had picked along the way in the urn designated for their offering and after they washed their hands and feet, they knelt at the altar, and Sucire began to pray.

She prayed for the safety and health of her family and for all those in the village. She gave thanks for a fruitful harvest, then she prayed for guidance, to know how to handle Lucky’s strange gift and finished the prayer by giving thanks for all she had and for the wise mother Tunoi who had bestowed it upon her.

Then she took one of the fermented flowers kept just inside the temple entrance on a special shelf and ate it.

Lucky held out his tiny hand, expecting to try whatever she did, as always. When Sucire shook her head, he pouted, but he accepted her explanation – that it would hurt his tummy as this was not meant for baby demons, but for demons full grown.

Then she began to make camp, light work when three red manoi appeared to help, constructing a bigger, sturdier shelter than she could have on her own in much less time. They even brought moss and leaves for them to lie on. Two yanth showed up next, appearing to sit guard not unlike the yanth on either side of the statue of Tunoi.

She put Lucky on her back in his sling and went to find water, and a large red manoi appeared and led her straight to a pool where the water was cool and fresh, caught in a natural basin after the rain earlier that afternoon.

“Thank you,” she told the creature after letting Lucky drink his fill and filling their gourds.

The creature burbled at her, and Lucky burbled back, perhaps saying a more appropriate thank you, she knew not. She laughed at her cub, tickling him as she cleaned him with a soft leaf and dried him with moss.

“You are beautiful,” she told him, as she washed up.

Lucky just laughed and clapped his hands. “Yu beuf,” he said, his baby talk not quite up to repeating the word yet.

He nodded and laughed.

“Thank you, my love. But I am nothing compared to my best boy,” and she tossed him into the air until his laughter became a yawn.

The moon was high when they bedded down, surrounded by a coterie of protective animals and Sucire’s ready spear. And they slept easy.

She woke a few hours later, her mind cloudy from the fermented plants she’d ingested, but not so foggy that she could not evaluate their surroundings for threats. Finding none she checked on Lucky, found him sleeping soundly. Several manoi eyed her curiously, likely wondering why she’d abandoned a sound sleep to stare at the temple.

Even the yanth raised their heads from their paws, eyed them, yawned and dropped back down, sleeping again in moments. The gentle chuffs of breath moving through their long whiskers sounded like deep, raspy whistles, and Sucire sighed contentedly in the dark and let the vision come.

It started out well. She saw Lucky and her other children growing up strong and happy together, Sansone grew even more handsome as the moons rose and the seasons passed. But then the vision changed. The sky grew dark, pierced through with angry, blood red and a sharp, ugly white, a color she’d rarely seen in nature.

The white spread like vapor, not unlike the mist that hung over the forest after a long, hard rain when a bright, determined sun appeared on its tail to burn the water into a cloud. But this cloud did not dissipate. It formed into demons with long, pointed tails like curved spears and razor sharp claws, their tall, narrow bodies slashed with red markings and hate burning like fire in their eyes…