Men can be big babies – especially when they’re unsure in love. You know it. Sometimes it’s cute. Sometimes you wanna go upside their heads. But when they have power over you, the situation can be a bit dicier. 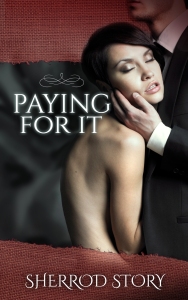 Take Tunie, for example. As Charles’ mistress she’s obligated to deal with a certain amount of foolishness – he’s paying the bills. But only a certain amount, okay? For her, down and out does not equal doormat.

Please enjoy this snippet from Paying For It, out now.

He was surprised to learn she was an artist of sorts. He was working the first time she started hammering. He went to investigate. After he helped her hang it, he admired the framed piece, an amazingly detailed face made of pieces of fabric and fur, buttons and such inside a plain black frame.

“This is interesting,” he commented, moving to look at another piece she’d already hung. “Different. Where did you get it? It looks,” he stared, turning his head to view it from another angle. “It looks familiar.”

“It’s a portrait of my mother.”

She laughed at his shock, and he apologized, but she wasn’t offended and readily told him of her habit of tearing into old clothes and pulling things apart to recreate them as faces, bodies or amazingly detailed little homes with doors and windows made of different types of fabric.

He’d insisted on seeing everything, even more impressed when he learned she’d framed each piece herself and devised her own matting from heavy paper or silk.

“These are amazing. Have you ever sold anything?”

She’d laughed and shook her head. “No. I can’t see anyone buying this recycled mess. It’s just something I do when I have time and the money to buy materials. It’s a hobby, nothing more.”

“It’s art,” he corrected her, staring at the wall hanging of her mother. It was the size of a small throw, and seemed so warm and alive, he almost expected the face to smile at him, the care and emotion with which she’d created it was that palpable. Tomorrow he’d have his assistant get her gift cards to nearby fabric and craft stores. Maybe he’d have his friend Fan come by and take a look. The gallerist was always on the lookout for fresh talent, and this was certainly different.

He came in the next day and found she’d moved some of the African-American themed prints he’d hung in the living room and replaced them with her own work. He spent some time after dinner examining the fabric portraits with their wrinkles made of string, flowers with button petals, trees with fur trunks and apples made of slightly shabby, but somehow still luxurious felt.

He discovered he loved to watch her work. Once while cutting into an old decorative pillow she’d salvaged from a neighborhood yard sale, she jerked too hard, sending stuffing flying into the air. She laughed until she cried, chunks of white fuzz clinging to her hair and skin. He had a lot of fun brushing her clean, and then making her dirty again, laughing all the while.

He had not expected to have fun with her. He had not had fun with any woman, not since The Bitch. Cecil Charles Douglas, a name only his mother ever used, did not have fun. He worked. He fucked. He exercised to make the former two activities easy, and occasionally he had drinks out with friends he’d known for years.

With Tunie he laughed, long and hard, and for no good reason. At first he did not react well to this development. Already grappling with his compulsive need to see her, he was often pissed when he arrived at the apartment. As if the knowledge that he’d soon be enjoying himself doing something not involving money or business was an irritant.

If he didn’t make love to her immediately, he often required her to jolly him out of the grumps, as she called it. He would sit as stiff as a King on a throne while she laid dinner before him, and refilled his highball glass exactly one time with the whiskey and ginger ale he favored before he was switched to seltzer and lime.

The first time she did it he’d raised a brow. “I asked for a refill.”

“You’ve already had two. I’m not gonna deal with a drunk. Its soda and lime or you can find another bar.”

Soda and lime it was. Eventually, he stopped drinking his evening whiskey at all. He didn’t even miss it. He was too busy with her.

When he was particularly difficult, finding fault with everything from the programming on TV to the songs on the radio, she’d sigh and give him a look. Then maybe she’d sip at a glass of wine – he’d yet to see her finish more than one – and sit on the couch watching him pace or stand at the window and look over the lake.

The first time he “clowned” she turned off almost all of the lights, turned on a CD – Justin Timberlake of all things – and asked him what was wrong.

“What makes you think something’s wrong?”

“You’re acting up. I figure there has to be a reason.”

“Acting up?” he sneered.

“Yeah, acting up. I could have said you were being a dick, but I was trying not to pour gas on the fire.”

He shot her a particularly filthy look, to which she grinned, and went to the kitchen counter where his dinner waited on a covered plate. Roasted asparagus with lemon, a thick baked pork chop redolent with sage and mashed sweet potatoes. He could smell the butter and cinnamon from here. His mouth was practically watering to eat it, but sheer bloody minded stubbornness kept him away from what he wanted most.

He watched, satisfied when she followed his order immediately, and as soon as she got close he pulled her into his arms and kissed her until she was dazed and breathing hard. That made him feel better – to know he wasn’t the only one being turned upside down by this thing between them – and then he was able to relax and eat his dinner in comfort.

Another night, after she watched something on TV, and he watched her watch it, she rose to refill their glasses with the fresh juice she habitually made from lemons, limes, cucumber, grapefruit or whatever was handy – tonight was lime ginger ale – and returned to sit beside him on the couch.

He helped her to sit comfortably on top of him.

“Did you eat already?” He’d been later than usual getting home, and he knew she liked to eat before six.

“At breakfast and lunch,” she laughed.

He huffed irritably and pushed her off his lap. He went to the kitchen and fixed a small plate, returning to pull her back onto his lap. He held a crisp green bean to her lips. She took a small bite, and he ate the rest. He held another to her lips. She took a bite, and again he finished it. He fed her bite by bite until their shared plate was empty.

He let her hop down to refill his plate, and again he blocked her when she moved to sit next to him. He ate the rest of his dinner with her on his lap, forcing her to feed him since one of his arms was wrapped around her waist, and he refused to move it. All the while, he watched her.

When dinner was over he rose with her in his arms, carried her to the bed, and though he was hard, somehow he was able to subdue the constant, driving urgency he felt to make love to her. Instead they did something he’d only recently started doing in bed – they talked.