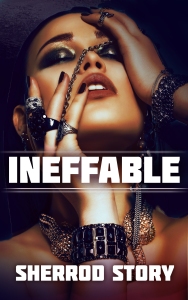 For instance, when you write about a rich, powerful man, used to getting what he wants, when he comes up against a strong woman who’s capable and fully intends to keep running her own show, the fireworks between them can be brighter than a holiday display.

Welcome to the world of Nori and Margot.

Please enjoy this snippet from Ineffable, out now.

This was not a good idea. It was never a good idea to mix business and pleasure. That dutifully said, Nori knew there wasn’t a chance in everlasting hell he was leaving her home without trying to make love to her. Even feeling that he might come out the loser in a sexual encounter, he couldn’t resist her. For the first time in his privileged life he was prepared to take what he could get.

She filled a glass with cool tap water and drank it. She filled one for him, and it was clearly an afterthought, which bugged him, but he drank the water down, never taking his eyes off her.

Twenty minutes later she told him to wash his hands.

She jerked a thumb toward the hall without looking at him. “First door on the left.”

Nori washed his hands quickly then took a peek into the other rooms he passed. He couldn’t see much. The blinds were drawn everywhere.

She was eating when he returned, and he sat down across from her. There was a folded napkin and another glass of water beside his chair.

He nodded, watching closely as she dashed on a bit of the sauce.

He did. The nachos were perfect. Spicy and flavorful. They ate in silence, and he continued to eat after she stopped and checked on a bottle of wine in the freezer. Apparently it wasn’t cold enough. She prepped two water glasses with ice and poured it anyway.

“You don’t eat much,” he observed. “I suppose that’s why you’re so slender.”

He shrugged. “Are you naturally skinny then?” He was trying to get a rise out of her.

It occurred to him that she was trying to get him out of the house. Since he didn’t want to go he shook his head no. “Too hot.”

“Answer the phone if it rings, will you? My answering machine’s broke.”

She didn’t mind him answering her phone? She was either the most trusting woman he’d ever met, or she just didn’t care. “Sure,” he rose and took his dishes to the sink.

He lingered in the kitchen, but as soon as she left, he started poking around. He clicked on the light in the first room he came to, a guest room. It appeared untouched with the exception of the bookcase. He moved closer to read the titles and found a little bit of everything. There were books on nutrition and cooking, jewelry making, finance, business, fashion, biographies of famous entertainers: Bette Davis, Josephine Baker, Lena Horne. There was also fiction. Most of it by African-American authors: Toni Morrison, Zora Neale Hurston, Alice Walker. He found several volumes of poetry by Langston Hughes and Maya Angelou. A book lay on the night stand, The Secret History by Donna Tartt. It was huge, and when he flipped through to the back, he found a white woman’s picture above the author bio.

He went to her bedroom bathroom next, all white and very clean. There were no pills in the medicine cabinet, which was strange. Most people had aspirin or vitamins at minimum. There was very little makeup either, a tube of mascara, some blush, a four color palette of cream eye shadow, two tubes of lip gloss, one pink, one dark red. There were lots of skin care products, however. He saw two kinds of serum, three moisturizing creams, two bottles of toner, several exfoliants and cleansers.

He closed the cabinet and opened the closet door. The top two shelves were towels. The third held bar soap, toothpaste, candles and hair products, and wa la, a bottle of over-the-counter painkillers. The bottom held packs of sanitary napkins, including a little round basket with a selection of them inside. He theorized she filled the basket and set it out when the time came, removing it when her need passed.

He heard the key in the door and quickly nipped into the small bath again where he peed, washed his hands, and emerged to find her kicking off her shoes with an armload of mail.

“You went to the mail box in those shorts?”

Shit. He hadn’t meant to say that. But she laughed at him.

He had but he hadn’t been thinking. He’d been wishing. He wouldn’t make that mistake again.

“Where did you go?” It was a ridiculous question, but she answered it.

“Fine. I’ll have designs for you to see by the end of next week as agreed.”

He nodded slowly, following her from the room. Wait. She was taking off her clothes!

“What are you doing?”

She smirked at him over her shoulder as she walked into her bedroom and clicked on the light. “What do you think? I thought you wanted some pussy.”

“What?” he asked, attentive as she removed one earring and then the other.

“Pu-ssy,” she enunciated. “Isn’t that why you’re here?” She walked toward him, tugging rings from her long fingers. “Come on, now,” she coaxed softly, retrieving a hair band from her wrist to ball her long hair on top of her head. “I know you didn’t come to eat my cheap ass lunch.”

Ineffable is out now.