…I saw a few cracks. Not to say that I didn’t enjoy it. I did. I adore the subject matter. I’ve been absorbing information about Wallis Simpson for years, learning about her style prowess and enjoying the story of a woman with no particular looks to speak of, who made a King fall in love with her so hard he abdicated his throne.

W.E. starred Abbie Cornish and Oscar Isaac (pictured here) as the modern day lovers to Andrea Riseborough and James D’Arcy’s historic representation of Wallis and the King. They were many similarities between the couples, the smoking and drinking and lifestyle, as well as the limitations. The King wasn’t terribly bright, and he was a bit weak willed. Oscar, who played Evgeni, a Russian security guard, was limited by class and to a lesser degree by money. 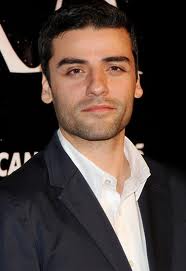 The original Wallis (Riseborough) and modern day version (Cornish) also had similar problems with their respective first husbands. The storyline was there. The dialogue wasn’t a problem, and the actors gave strong performances, but the direction was flawed. That’s what I mean by cracks. Madonna seemed to cut scenes awkwardly or too quickly, focusing on odd things, and kind of, I don’t know, teasing the viewer.

For instance, during a flashback modern Wallis recalls a bout of lovemaking with Evgeni. They’re kissing and she takes his cap and puts it on her head, but it wasn’t enough, and I felt that way more than once. If only she’d lingered here or there… And it had nothing to do with nudity, although there was some, but it wasn’t gratuitious. It was more about me wanting her to enhance the flavor of the romance. To allow the sensuality between the lovers to blossom leisurely as opposed to a rushed flash here and there.

Maybe Madonna was leery of depicting too much sensuality, or she meant the choppiness to reflect on the different Wallis’ state of mind. But it came off as amatuerish. I blame her direction for the occasional stiltedness in Cornish’ performance as well. But I’m done being critical. It’s still worth seeing. Riseborough and Isaac were fabulous. I may have to stalk him now. Cinematically, of course.