I watched Reflections in a Golden Eye last night with Elizabeth Taylor and Marlon Brando. He plays a repressed homosexual in a high ranking position in the Army. Dame Taylor plays his feisty wife who just happens to be having an affair with one of their neighbors. 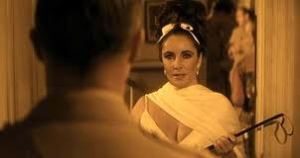 Crazy film. All eerie music and unspoken neurosis. She does a nice line as a beautiful harpy, one who has good reasons for what she’s become – a neglectful and deceitful husband, for instance – yet whose character is not particularly sympathetic.

Her character was actually quite simple. She was stealing little bits of happiness wherever she could, making the best of a bad situation, and unlike the other female character in the film, she was strong. Life had dealt her a blow with the gay husband, but she managed to get a few of her own licks in too.