It’s been almost two months since I filed my taxes, and like most Americans I’ve been watching the mailbox for my refund. Also, like most Americans – I’m sure – I spent the money! assuming, hey, I’ve never had a problem, I don’t cheat on my taxes and never have, it will be here in short order like it always is. 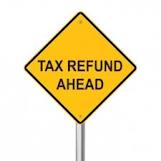 About a month ago I called my tax preparer to ask WTF? Is everything OK? She gave me a lot of attitude, said she would check into it and never called me back. No problem. I’m a take charge kinda gal so I got online and looked things up myself. No information available I was told by phone and online. But online it said to basically wait eight weeks before you panic. This week marks eight weeks.

I called the witch tax preparer back, got even more attitude and after calling back several more times she finally tells me, there’s been a delay, there’s a note that some refunds were held up, wait seven to 10 days, blah, blah, BS, blah. Fat kids not going for it this time.

A tax accountant friend of an associate kindly volunteered to check into it for me and found – on the same day she told me this second bowl of crap mind you – that there is no record of my return. Good night. I have never been late on my taxes. NEVER. Now, because I tried to give someone a chance – my perfect record with Uncle Sam is ruined, and who knows what the hell’s going to happen when I mail my late-as-hell-return in tomorrow.

Sometimes you have to wonder, is it me? But how could it be? She did my taxes successfully last year, no problem. She did screw my mom’s up, but hey, I thought, things happen, and you can’t blame somebody to death for making a mistake.

When it comes to the government and my money you absolutely can!

To think I told my poor sister recently that she was sounding like a victim after she vented about some things that happened in the past and are still reverberating for her in the present. She was fretful, which is not like her, usually she’s a tower of strength with the bounce back of a well slung ping pong ball, but in that brief moment of vulnerability, I was NOT being sympathetic enough. Not at all.

Sometimes you really just have to wonder, WTF?