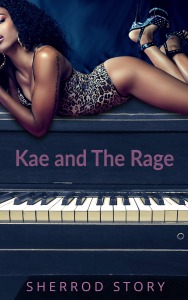 Hey y’all. Here’s another snippet from my upcoming young adult romance “Kae and The Rage” out this month. This picks up where last week’s blog left off. Let me know what you think!

So, Billy played. There was a model, a funny blond with huge brown eyes and dark, thick brows. She had a mouth like candy and a throat like rubber. They had a lot of fun for a few months, but she had a wandering eye too, and his interest waned when hers did, though she professed an interest in sticking around.

Then there was an actress. An up and coming ingénue, she was a lovely Latina with thick, wavy black hair and was charmingly submissive to him in public while tearing a sexual strip off his ass in private. They lasted a few months too.

Then he had to cancel one of their dates for a last-minute gig. She was right to be upset, and he’d planned to make it up to her, but the tantrum she threw was so ugly it turned him off completely.

Then there was a student, a girl next door type with long, thick brown hair and big green eyes, but she was too eager for the life. His celebrity was more interesting to her than he was.

Then there was another model, a gorgeous Asian creature who spoke the most charming broken English. She had a lush, submissive sexuality and this way of peeking up at him through her lashes that kept him harder than treated brick.

It was the loveliest manipulation because she was only a few inches shorter than he was, yet she was adept at making herself seem like a doll. She lasted nearly six months. Paul broke them up, jealous despite his protests to the contrary. But Billy didn’t care enough to fight for her.

The last woman he dated was a musician, a lovely little British folk singer who had no interest in anything except laughing and sleeping with him, singing in pubs and bars around New York and playing her acoustic guitar. But he missed Kae and wanted to go back to LA when he heard she was hurt, so that was that. As a parting gift, he deliberately had someone film him singing one of her songs and post it on Instagram. She sent him a text later with a dozen heart eyes emojis, and told him her phone was suddenly ringing off the hook.

He smiled when he saw it, but his mind had already moved onto Kae. He couldn’t wait to see her, and he prayed futilely that the reports about her condition were exaggerated. Jackie had already sent him some pictures and a straight forward, fairly brutal account of what happened. Still, he hoped. He’d missed her so much, and the thought of her being in pain made his heart ache.

If he was honest, he always missed Kae. She was one of very few constants in his life, and the only person he spoke with regularly besides his mother, his bandmates and the core group of professionals who kept The Rage going strong.

She was there to tease him after every very public breakup. And the public always found out, no matter how hard he tried to maintain some privacy. Sometimes he swore there was a video recorder in his neck. Bloody everything ended up on YouTube.